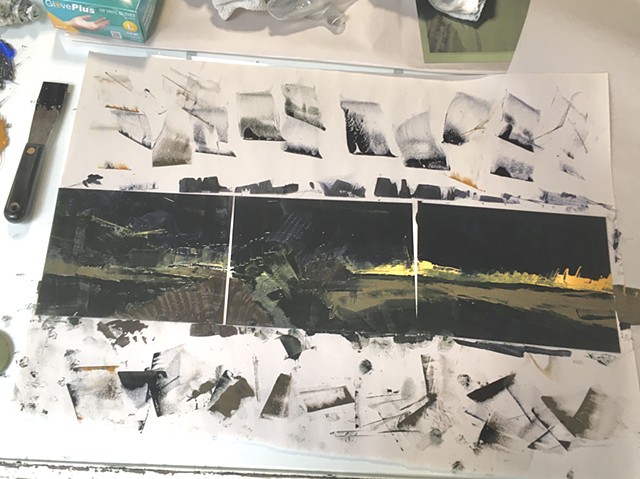 Polymer photogravure or polymergravure as it's often called, is a modern version of traditional copper photogravure technique. Both approaches involve the transfer of a photographic image to an intaglio plate for printing on a press. The materials used were developed for commercial printing purposes and were later adapted for fine art printmakers. The medium provides a rich, distinctive surface quality that cannot be matched by other photography printing techniques.

Producing the film Each image begins with a black-and-white digital photograph that is modified in Photoshop to optimize the balance of lights and darks. A positive of the digital image is then printed onto a piece of transparent film using a high-quality inkjet printer.

Exposing the plate The film positive is laid over a steel-backed, polymer-coated plate that is sensitive to ultraviolet light. A timed exposure of ultraviolet light transfers the image onto the plate. (An additional exposure of an overall plain gray “aquatint screen" is also executed to assure even black tones.) The exposed plate is rinsed in plain water. The polymer in the dark areas that wasn’t hardened by the light gets washed away leaving a surface of microscopic pits. These pits capture ink that is rubbed into the plate; shallow pits print light tones; deeper pits print dark tones.

Printing the plate The cured polymer plate is printed like a traditional intaglio copper etching plate. A skim of ink is applied all over the plate that is then wiped away with a piece of starched cheesecloth. The wiping action removes ink from the highlights of the image but leaves ink in the pitted areas. The wiped plate is placed on the bed of the press and dampened art paper is placed over it. Under the high pressure of the press the dampened paper is pushed against the plate and receives the inked image from the plate. The finished print is dried and flattened.

Adding Color I use two methods of adding color to the print:

1. Multi-plate technique: Two plates of the same size are created using the procedure described above. One plate, usually printed in black, carries the image detail. The other plate is produced to carry colored ink in select areas. The paper is run through the press twice, first to receive the colored ink, and then again to receive the black ink.

2. Single-plate technique: Different colors of ink are applied to different areas of the plate. The printmaker’s name for this technique is “a la poupee.” The areas are carefully wiped to prevent too much mixing of adjacent colors.